On Wednesday, our year 4 girls' team competed in the Lewisham School Games Cup. There were 20 primary schools that competed with teams being placed into groups of 6 or 7 teams. Each team played the other teams in their group with only the top team, plus one second place team moving to the semi-finals. Although our team went through the group games unbeaten (winning 2 games and drawing 3), they did not progress to the semi-finals. However, the players competed brilliantly and showed a lot of skill and potential in defence and attack. Well done to Keren, Vittoria, Mihicou, Eleanor, Emmie, Marwa, Paskel and Islah. We are very proud of you.

Although our girls’ teams lost 3 of their matches, they did manage a good draw and were never beaten heavily. Furthermore, they showed progression from one match to the next, which bodes well as we move forwards in the season. Well done to all the girls involved. 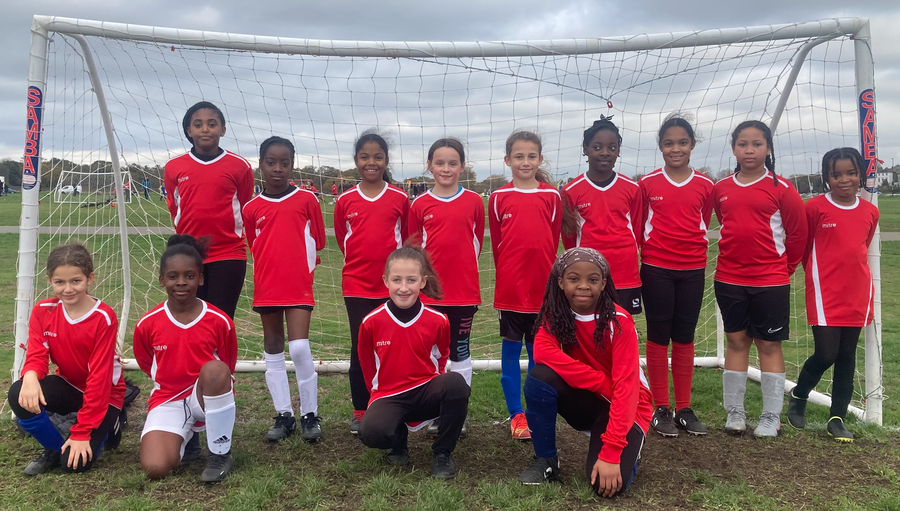 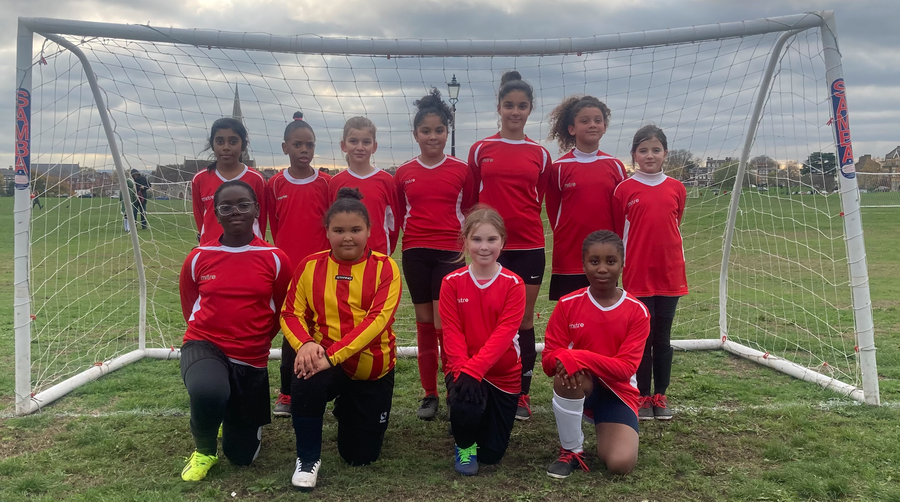 The game started at a frantic pace, with both teams full of energy and showing a great desire to challenge for every ball. The first minutes of the game were dominated by Stillness, but Downderry’s resolute defending along with two super saves by our goalkeeper, Hannah, prevented the team from Brockley taking the lead. As the match continued, Downderry began to forge more attacks and started to threaten the Stillness goal, and were unfortunate not to score at least one goal before half time.

The second half continued at the same frenetic pace, with both teams battling for every ball and having chances to take the lead. Then, with one minute remaining (while everyone was beginning to assume extra-time was imminent), Maija received the ball in the Stillness penalty area. After dribbling past the last defender, she smashed the ball past the goalkeeper and into the bottom corner of the goal. The crowd of supporters went wild as they knew there was no time for Stillness to respond – and the trophy was ours.

And so, now our Downderry girls’ team have won a Lewisham competition. It was a great effort by all: all of our players tried hard and supported each other brilliantly.

A Wonderful Attitude and Effort

Our girls’ team continued their development on Saturday and demonstrated a wonderful attitude: They never gave up and kept trying hard until the final whistle of every match.

Although we did not win any points, we were competitive in every match – competitive with players from years 4, 5 and 6, while most of our competitors had teams consisting of just year 6 players. Furthermore, two of the teams we played had district players and have won previous matches by scoring double figures. Therefore, the results must be seen in that context.

Our next step is to develop our passing and dribbling skills so we can mount more attacks to give ourselves more chances of scoring. Hopefully, many of our players will consider developing their skills away from our Saturday matches – at playtimes and lunchtimes, at our after-school club, at a club outside of school, or just at home or at the park.

Well done to all those who represented their school. We are very proud of you.

Much To Be Positive About

On a beautiful autumnal morning, our girls’ team opened their Lewisham Schools’ Football League campaign in thrilling fashion. All matches were very closely contested and there was a great effort from all of the players involved. Although our girls’ team lost both games 1-0, the results could have been much different, and there was certainly much to be proud and positive about.

Kimora, Yasmin, Nelly, Tia, Bella, Sayuri and Shianna were solid in defence, while Hannah, Kayla, Natania, Suzie, Evie, Inaya, Maija, Aaiyanna-Lily, Isla, Aalissia and Emelia-Rose all worked hard to win the ball back from the opposition in order to drive the team forward and give us a chance of scoring.

Well done to all those who represented Downderry. We are very proud of you.

On Saturday 30th November, Downderry’s Girls’ football team had another competition to prove being worthy of victory. With pounding hearts, a brilliant team and many supporters, Downderry went on to play their first match.

Football is a game of skill, control and teamwork and that's what Downderry had. We were dominating the game with 52 shots! Unfortunately, the ball could not reach the back of the net but we kept trying. Skilful, good attacking play was demonstrated by Olivia, Maija, Nicole and Aysha but in order to score we needed more time which we run out of. Before we knew it, the match had already ended and Holbeach had clung onto a point against us.

The second match hit us like a tumbling brick wall. We knew it was going to be tough as we faced the league favourites, Edmund Waller. The referee blew the whistle to start the match and in a record time of 4.2 seconds Edmund Waller had scored and we were left looking at each other as Nicole picked the ball out of our net! However, Downderry did not give up! Amazing defending by Victoria, Chenai, Nia, Neolani, Tehilla-Lynn, and Kaja kept the score to a respectable 2-0.

Thank you for everyone who joined us to play our matches and we will see you after Christmas!

Report written by Victoria and Olivia.

On a beautiful Autumn Saturday morning, our Downderry team began their league campaign against Fairlawn and Good Shepherd.

In the first match, Downderry scored early through Olivia and looked like they would win easily.  However, a plethora of super saves by the Fairlawn goalkeeper kept the difference to just one goal until the last few minutes of the game when Downderry doubled their lead thanks to a fine strike by Aysha. At this point, many assumed Downderry would continue their dominance and cruise to victory. Fairlawn, however, had other ideas: they scored almost immediately and for the remainder of the match peppered the Downderry goal with attack after attack and were unlucky not to score an equalizer. However, Downderry defended desperately and thanks to some amazing defending (including a world-class sliding tackle by Tehillah-Lynn), were able to hold on to claim victory and a valuable three points.

The second game, against Good Shepherd, proved even closer than the first. After some confusion at a goal kick, Downderry conceded an early goal against a strong Good Shepherd team and it looked as though their unbeaten run may finally come to an end (they had won three matches in a row in all competitions before this). However, resolute defending by Kaja, Neolani, Nia, Tehilla-Lynn and Lina, along with energetic tackling and attacking by Paige, Nicole, Maija, Chenai, Aysha and Olivia proved too much for the team from Good Shepherd, and just after half-time Downderry scored a deserved equalizer thanks to a fine strike from Olivia. Downderry continued to knock at the Good Shepherd door in an attempt score a winning goal, but unfortunately time ran out before they could. A draw was a fair result. Well done to all those who played. We now look forward to our next matches in two weeks.

On Tuesday, our year 6 girls' team attended a football festival at Whitefoot Lane Playing Fields. All matches were very close but Downderry performed brilliantly and were able to win ALL their matches and, therefore, the overall competition. Wearing their medals home, it was a great way to start the season. Well done to all the players.