Menu
Log in
School is open to all our children and staff... Please refer to the COVID-19 page of the school website and our “Plans for Full Reopening in March 2021” document... Breakfast Club and after School Forest club are now open to all children. Please contact the school office for more information.

On a wet and windy Tuesday, some of our year 4 children attended a football festival at Whitefoot Lane Playing Fields hosted by Bonus Pastor.

Our girls’ team were brilliant in their attitude and effort: they never stopped trying and were wonderfully supportive of each other. As a consequence, they managed to score eight goals and win the competition. A special mention must go to Sophie who played in goal for all the matches. Not only was she willing to play in this position for the team, but she also made some wonderful saves (reminiscent of the great Peter Schmeichel).

Our boys team won their competition on goal difference after drawing their first game with St Augustine’s then winning the rest. Another magnificent performance from all the players. A special mention must go to Vipushan who played in goal and whose saves were vital in the first match, as well as Elijah who played on pitch for the first time for the school and scored both goals in our draw with St Augustine’s.

Well done to everyone who played and thank you to all who came along to support.

NEVER GIVE UP! ALWAYS BELIEVE!

Our year 4 came in to this weekend's round of fixtures unbeaten and looking to maintain that record.

Our first game was against Hornimans. Right from the first whistle, the team looked to get forward at every opportunity and every time they lost the ball, won it back immediately and pushed forward. The midfield of Isiah, Santiago and Dexter proved far too strong for Hornimans and we soon took the game away from them going into half time with a 2-0 lead. The boys came out in the second half hungry for more goals and they soon came. Thanks to great play from Luis and Dexter on the wings and Isiah and Santiago driving through the middle, we added another four goals. It was a relatively quiet day for Elijah, Sebastian and Vipushan at the back. However, when they were needed, they did their jobs well. We finished as comfortable 6-0 winners.

Game 2 against Sandhurst proved to be a very frustrating game as Sandhurst were defending for their lives from kick-off. We went forward and created chances every time we had the ball (and this was quite a lot because Sandhurst were continually conceding possession and putting us back on the front foot). It was looking as though we would have to settle for a draw - even though a victory was really what we deserved.

Isiah, Dexter, Luis, Jonnie, Santiago, Sebastian were all trying their best to score but the Sandhurst keeper always seemed to be in the right place at the right time and was keeping us at bay. However, close to the end of the match Luiz received the ball just inside the penalty area, took on two players and then lashed the ball into the top corner to put us 1-0 up. Players and supporters went wild! After that, it continued to be one way traffic and the victory never looked in doubt. The boys continued to have attempt after attempt but just couldn't fine the second goal. However, it didn't matter. As the final whistle went, we were able to enjoy the feeling of back to back wins for the first time this season. This keeps the momentum going as we remain unbeaten.

On Tuesday, a team of year 4 pupils took part in the Lewisham Schools' Football Festival, alongside 34 other primary schools. In the group stages, Downderry were unbeaten, winning one game 7-0! Therefore, we marched through to the next round with hopes of footballing glory. However, those hopes were dashed in the quarter-final when we narrowly lost 2-1 to a team we had beaten in the group stages! Although we did not win the competition this year, every pupil worked exceptionally hard on the pitch and the level of teamwork was excellent. Well done to all who took part (we'll win next year!). 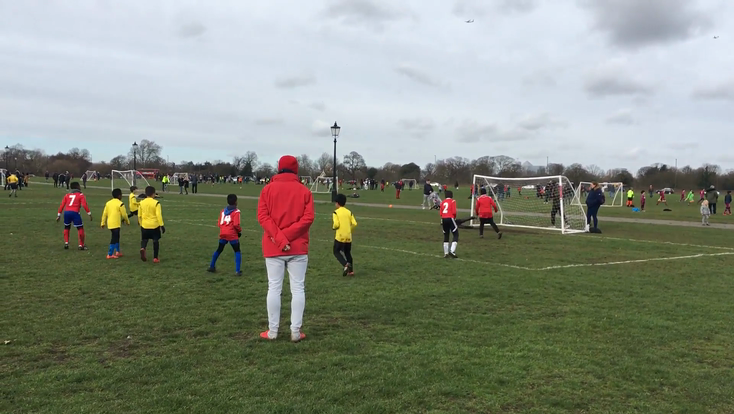